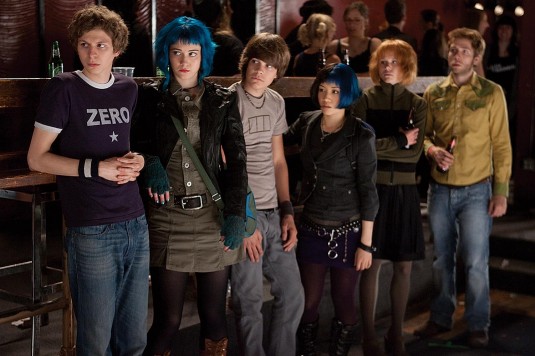 What a time for us aging comics fans. I remember Stan Lee’s pipe dreams in 70s Marvel Comics, promising us that a Silver Surfer film was in the works, that a big-screen X-men movie was coming any day now, true believers. Now we have not only the movies, but also reprints of the source material in easy-to-find trade paperbacks. Most of North America still shakes its head at the nerds and hipsters who read comics, but they are at least resigned to tolerating them.

And then there are those who love or even worship the nerd. I myself am in love with a girl who kicks my ass at Mario Kart. And we both love Scott Pilgrim, especially the new film by Edgar Wright, which takes a good series of graphic novels and uploads them to the big screen with a style and visual language and energy that other adaptations rarely reach (or even attempt). Iron Man 2 is a limp afterthought-sequel by comparison.

Much ink has been spilled about the surface elements of this film: the homages to video games, the comic book-style impact lettering, the Canadianisms; but at its heart, Scott Pilgrim Vs. The World is a fusion of a coming of age film and a heroic journey. Michael Cera, as the 22-year-old Scott, brilliantly mixes the anxiety of young manhood with the weariness of a character like Rob in High Fidelity. Like Rob, Pilgrim has enough of a romantic past that he has been wounded and wounded others. He is both thrilled to have a chance with the exotic (American!) Ramona Flowers and insecure about her past.

As much as we are probably meant to identify with Scott, I found myself identifying with Ramona too. There are wonderful, quiet moments peppered throughout the sight gags and smart exchanges that give us a glimpse of the damaged hearts trying to connect. One that I particularly recall:

Scott – You disappeared.
Ramona – Yeah, I do that.

Like Ramona and Scott, most of us have made some bad calls with relationships, are scared of getting hurt again, and might even have an evil ex or two. In the end, Scott Pilgrim Vs. The World offers a message of hope and redemption with a kick-ass soundtrack and fight scenes.